Atam Pargas Social Welfare Council in association with Punjab Agricultural University has launched ‘Leaf Colour Chart Awareness Campaign’ to educate farmers to avoid excessive use of urea in agriculture. After the adoption of village Mirjapur in district Pathankot, another village Bassian has been adopted in Ludhiana district to develop the village as model village for need-based fertilizer nitrogen management using leaf colour chart (LCC). The village adoption day was organised at Guru Nanak Public Senior Secondary School, Bassian on May 24, 2017.

Dr. Varinderpal Singh, Sr. Soil Scientist, PAU, Ludhiana conducted brainstorming discussion on fertilizer nitrogen management with the farmers and asked them to share farmers’ practice in the village. The farmers told that they use 150 to 200 kg urea per acre in rice. Dr. Singh cautioned them to avoid such a high dose of urea and discussed the harmful effects of excessive urea application. He told that excessively applied fertilizer urea do not increases yield rather escape to atmosphere and causes pollution. Excessive urea application further increases insect-pest incidence and thus lead to consumption of high doses of insecticides and pesticides that increases the cost of production and also deteriorate quality of the produce. Dr. Varinderpal Singh advised farmers to avoid burning of crop residues in field and educated them about the different crop residue management options. He further sensitized the farmers to involve youth of the village in agriculture, reduce expenditure on social functions and plant trees in the coming monsoon season in the village. The farmers make a promise with raised hands to give full support to the initiatives.

Dr. Naveen Aggarwal, Entomologist, PAU, Ludhiana educated farmers about judicious use of insecticides in agriculture. The LCCs were distributed to all the farmers of the village free of cost with the support of Cambridge India Network for Transitional Research in Nitrogen (CINTRIN) project. 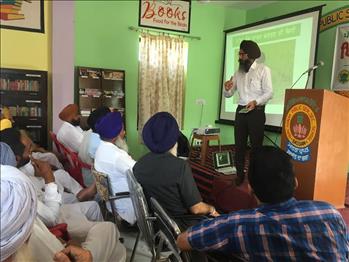 Dr Varinderpal Singh delievering the talk on use of LCC . 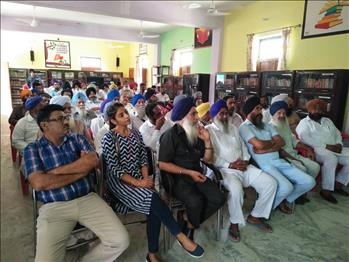 Parcipants listening carefully to the orator. 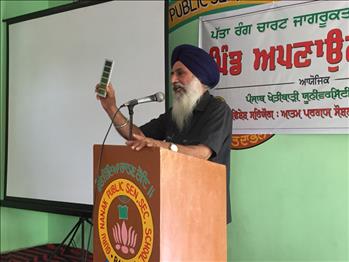 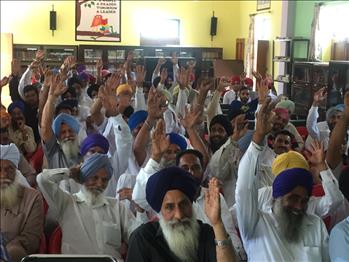 Farmers affirmed their commitment by raising hands in support.

IF YOU WANT LEAVE A MESSAGE.PLEASE LOGIN